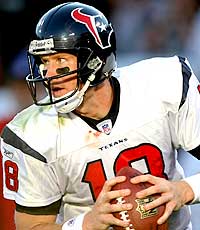 I think the Minnesota Vikings are a good quarterback away from being serious contenders for a Super Bowl Championship. That is why it baffles me that they signed quarterback Sage Rosenfels.

Rosenfels has never been a starter in his eight years in the NFL other than filling in because of injury. Probably there is a reason for that. Last year Rosenfels, subbing for an injured Matt Schaub in Houston, was a comedy of errors. He was a quarterback that consistently snatched defeat out of the jaws of victory with some rather amazingly stupid plays. He was so bad one blogger dubbed him the Douchetard of the Week on several occasions, and eventually named the award after him.

I am shocked that the Vikings didn’t go after Matt Cassel. While Matt Cassel might not be the perfect fit for their offense, he at least showed he was potentially a solid starter in the NFL.

The Vikings will now have to depend on their defense and Adrian Peterson putting on his Superman cape once again to get them to the playoffs. But with a Rosenfels and Tarvaris Jackson competing for the starting quarterback job, I don’t expect much from this team.