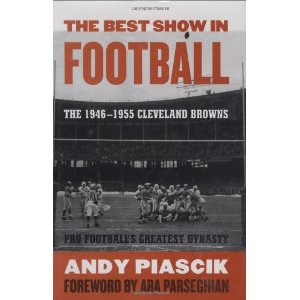 Despite playing in the All American Football Conference from 1946-1949, a competitor to the National Football League at the time, Piascik makes a great case for the greatness of the Cleveland Browns.  They won seven championships in ten years, an unbelievable feat.  But four of those championships came as members of the AAFC, which many consider to be an inferior league.  The AAFC folded in 1950 but took in some of the old AAFC teams, with the Cleveland Browns being one of them.

The greatness of the Browns’ however is evident in that they won the 1950 NFL Championship in their first season in the NFL.  They also won it again in 1954 and 1955.  It is pretty clear that despite playing in the AAFC they were a great team, and maybe the best of that time period.

Beyond the argument that the Browns are the greatest dynasty of all time this book chronicles the rise of Paul Brown as the taskmaster head coach who sought perfection and greatness from his players.  And possibly the greatest quarterback of all time, Otto Graham, was at the helm in these winning years.  This book does a fine job of chronicling the team and its players of this era, and also serves as partial history of the AAFC.  This by itself makes the book a worthy read for those who like football history.