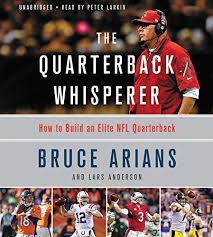 Bruce Arians deserved a better writer than Lars Anderson to discuss what it takes to be an NFL quarterback.  The book is a mess in a lot of ways with side trips in the middle of chapters that don’t necessarily related to the topic at hand.  There is a good book in here somewhere.

With that said, Arians has a lot of important points to make about what it takes to be an NFL quarterback.  Here he profiles those he has worked with most closely: Peyton Manning, Kelly Holcomb, Ben Roethlisberger, Andrew Luck, and Carson Palmer.  All are very different quarterbacks but with a lot of the traits Arians looks for in an NFL signal caller.  Unfortunately, a lot of the chapters start meandering into other topics, but nonetheless they are great vignettes about some of the best quarterbacks in the league and one primarily a backup quarterback (Holcomb) who Arians got the most out of.

What is the most important attribute for an NFL quarterback?  First, it’s brains.  To be successful in the NFL a quarterback doesn’t have to be the best athlete on the field, but he probably has to be one of the smartest.  The ability to watch film, read defenses in fast paced live action, and get the ball where it needs to be with accuracy and velocity ultimately is the key.  But football smarts is essential to success regardless of other factors.

And you have to be leader.  An NFL quarterback must be somebody others on the team look up to as an example and want to play with.  And all the traits above set that example.

As Arians notes, a lot of big armed, athletic quarterbacks have failed in the NFL because they did not posses these traits.

The other interesting part of this book is how some potentially great quarterbacks lack the maturity to play quarterback in the NFL.  Arians was with Baltimore when they scouted Ryan Leaf and Peyton Manning as their first NFL draft pick.  Arians walked around both players’ campuses incognito and just asked around about what people thought of them.  Everybody had good things to say about Manning and nothing bad, while nobody had anything but bad things to say about Leaf.  So that ingrained in Arians a clear lack of leadership and we see what happened to Ryan Leaf.

Overall this was an interesting book about NFL quarterbacks, just annoying disjointed and unorganized at times.