If you read one biography of Joe Namath this is the one to read.  It is extremely detailed and well done.

It covers his life growing up in a middle(ish) class family in Beaver Falls, Pennsylvania and his athletic exploits that made him a hometown hero.  He was even brash and bit incorrigible as a teenager, a trait that he clearly kept his whole life.  A solid portion of the book is dedicated to his family history and formative years, which laid the groundwork for his life.

I really enjoyed and learned a lot from the book about his years under coach Bear Bryant at Alabama.  It shocks me that Bear Bryant, the hard-nosed, disciplinarian coach somehow coaxed the best out of a rebel like Joe Namath and then immediately following Namath, Ken Stabler.  Namath was suspended for the last game and a bowl game in 1963 for being caught drinking, but Namath accepted the punishment and to this day speaks very highly of Bear Bryant.  Interestingly, Namath spent the weekend living under the coach’s roof hiding from the media.

Unfortunately for Namath he suffered a serious knee injury at Alabama and he played his entire AFL/NFL career with compromised knees.  He was certainly one of the most gifted throwers of all time and it’s a shame we could not see Namath in professional football at full strength.  His knees were so bad he couldn’t be drafted by the military for the Vietnam War.  People scoffed at the fact he had a medical deferment but played professional sports but that is how bad his knees were.  It’s amazing he was as good a quarterback as he was in the pros.

Of course, the book goes through Namath’s more well known pro career with the Jets of the AFL, his huge initial contract, “the guarantee” and win in Super Bowl III over the Baltimore Colts.  But it also talks about some of his troubles with the League because of his purchase of a nightclub where gangsters/mafia/gamblers hung out and the whole drama over being forced to sell it and his somewhat wild social life.

Finally, the book details his personal life which is somewhat well know and I won’t belabor here. 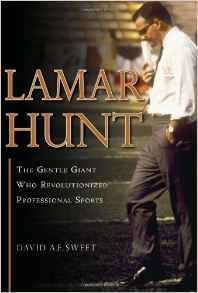 Despite an uninspiring writing style this is a very solid biography of Lamar Hunt.  Better yet, I learned a good deal about Lamar Hunt I didn’t know.  Most readers will recognize Lamar Hunt as one of the found fathers of the American Football League which competed directly with the well-established National Football League.  After a rather successful half decade the Hunt was then instrumental in the merger of the two leagues, creating the modern, NFL we know today.

Lamar Hunt was born not with the proverbial silver spoon in his mouth, but many golden spoons.  His father was a billionaire and Hunt inherited a vast amount of wealth that allowed him to pursue his own dreams and goals with little concern about the financial consequences.  He fell in love with football in college and as an adult desperately wanted to own an NFL team but was spurned by the old guard.  So Hunt did the next best thing, he found a group of like-minded men and created his own football league.

While getting a professional football league up and running and successful against the established, old school NFL was a daunting challenge, Hunt managed to do just that.  And despite eventually having to move his inaugural Dallas franchise to Kansas City, his team and his league thrived.  So much so, that eventually the NFL was compelled to merge with the AFL to avoid escalating player salaries and competition for television viewers.

The most interesting thing about Hunt through all this was his decency and humanity.  Unlike many who didn’t earn but were handed vast amounts of wealth who slid into slovenly habits and narcissism, Hunt was considered by his peers to be very nice, decent man and one who worked hard at his passion – sports.  Even during the intensive rivalry with the NFL’s expansion franchise the Dallas Cowboys, he managed to stay friendly with Dallas’s other billionaire football owner Clint Murchison.

The other amazing thing about Lamar Hunt was the other sports he was passionate about and some he helped get off the ground.  For example he was an original minority owner of the NBA’s Chicago Bulls.  He helped create the modern open era tennis by co-founding the World Championship Tennis circuit and is in the International Tennis Hall of Fame.  Finally, Hunt is instrumental in first bringing professional soccer to the United States as an owner of a Dallas professional soccer franchise, despite it rankling owners in the NFL.  While the league eventually collapsed, it was the precursor to today’s Major League Soccer.

The story of Hunt and the AFL-NFL merger is well told in other places but this biography also does that seminal event justice, while expanding ones knowledge of just how instrumental Hunt was in the sports world in general.

While the writing lacks a lot to be desired, the content is worth the effort. 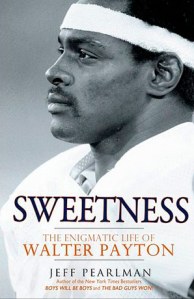 Payton grew up poor in a racially segregated Colombia, Mississippi.  While Payton never experienced firsthand violence growing up, it was a segregated community with all the racial prejudice against blacks that implies.  African Americans were treated as inferior and lived in a specific section of town.  His father was a hard worker and decent man but an alcoholic who didn’t seem to have a great deal of influence in Payton’s life.  But his mother was a hard worker who was the family disciplinarian and real glue that held them together.  This segregated community and overt racism of his childhood is probably what gave Payton a chip on his shoulder for the rest of his life, out to prove that he was inferior to nobody.

As schools were integrated and Payton went on to play high school football, he of course became the darling of the town, as great athletes often are, and was one of the most sought after football prospects.  He ended up, through some shenanigans by the coach, heading to Jackson State in Mississippi near his hometown for his college football career.

There he had a career that landed him as the fourth overall pick in the 1975 National Football League draft by the Chicago Bears, where he had a Hall of Fame career, setting the then NFL record for rushing yards (16,726 yards).  He won a Super Bowl ring when the Chicago Bears won Super XX over the New England Patriots.

This isn’t a biography, however, only about Payton’s nearly unmatched professional football career.  It’s about the man who lived it.  And there we find the darker side of Walter Payton.

Walter lived a happy but sheltered childhood and his sheltered life at Jackson State probably did not prepare him to live in the real world, especially the one outside of football.  There he met his future wife Connie who eventually moved to Chicago with him.

What was Payton’s real personality like?  Fun loving; happy go lucky, and a prankster.  Kind hearted to strangers, children, and those who were in need.  He was quite a compassionate human being.  But he was also childish, jealous, petulant, and someone who always wanted to have things his way.

What do we find out about Walter Payton in this biography?

First, while he was great teammate and superb player he was also a bit petulant when things didn’t go his way.  He wanted the ball and to be the superstar, but also had a quiet way of going about it.  In one of the more telling moments, he hid in a broom closet after the Bears won Super Bowl XX because he didn’t score a touchdown.  What should have been one of the happiest moments in his life turned out to be one of the most bittersweet as he cried in anger and refused to come out to talk to the press after the Super Bowl win, without some cajoling.  Coach Mike Ditka says it is one of his biggest regrets that he didn’t make sure Walter got the ball for a score in the blowout win.

Second, during his playing career Payton abused the painkiller Darvon, often popping them like candy.  He continued to abuse painkillers after his playing career, possibly as self-medication for depression.  Darvon is very hard on the liver and while Pearlman does not draw a direct line to his drug abuse and the live disease that ultimately killed him, he certainly implies it.

Third, Walter Payton struggled badly with loneliness and being out of the spotlight once his playing days were over.  He reportedly contemplated suicide, maybe on more than one occasion, and suffered from depression.

Fourth, Payton was a philanderer and liked women.  He clearly had fell out of love with his wife Connie and didn’t really live with her for most of his post-football life.  In fact, he fathered a child with another woman and had another long-term relationship with a flight attendant.

This lead to another bittersweet moment in Walter Payton’s life.  Against his wishes his girlfriend showed up at his Hall of Fame induction ceremony, unbeknownst to his estranged wife Connie.  In public, Payton, and probably more so Connie, put on the façade of the happy couple.  Payton was angry that his girlfriend showed up and she was literally just a few rows back from his wife and children during his induction speech.

So once again, what should have been one of the happiest moments in Walter Payton’s life instead turned into a nerve wracking, bittersweet experience.

A fifth aspect of Walter Payton that is apparent, even if Pearlman doesn’t say this directly, is he was probably a manic depressive.  If the behaviors exhibited in the biography are accurate, one moment he is manic and happy go lucky, being out public, and trying to make a living on his up and down again business interests.  And at other times he is darkly depressed, not wanting to be out in public, and even contemplating suicide.

Pearlman also points out all of Walter Payton’s good traits.  Even though he trusted very few people, he cared about people and went out of his way to make people around him feel good and he was very charitable to those in need.  He was also a great teammate who led by example on the field and was real locker room leader, even when the Bears had dreadfully inadequate talent around him.  The persona that surrounded Payton as a caring, hardworking, class act was a real part of Walter Payton too.

I think the veracity of this book is hard to question for one very simple reason.  Nearly all of Pearlman’s sources are identified by name.  Only two sources are not – his longtime girlfriend who showed up at his Hall of Fame induction and the woman with whom he has a child (which he never acknowledged).  Otherwise, former agents, players, long-time personal assistant, family members, coaches, and other acquaintances who Pearlman interviewed are all there, speaking through the author.  I have yet to see any of these people come out and refute what they said to Pearlman.  I know that the truth might be painful for many, but Pearlman has done a service to the memory of Walter Payton.