This is an excellent memoir by Super Bowl LIII MVP Julian Edelman.

The memoir is aptly named as well: relentless.  This is the saga of an undersized but determined athlete who persevered through high school, college, and the NFL to overcome his lack of size with relentless determination to succeed.

Julian walks us through his entire athletic career overcoming all the doubters and shaping himself into a successful athlete at all levels of football.  What is truly amazing is his ability to go from a small college quarterback at Kent State and learn a whole new craft of being a successful wide receiver in the NFL.  That is not an easy transition even for the most gifted of athletes but Edelman not only has done it but now has one of the iconic catches in Super Bowl history and now a Super Bowl MVP that will etch his name in football history in perpetuity.

I also liked how the book is interspersed with thoughts from coaches and teammates throughout his athletic journey.

This is a great book that shows that relentless determination can allow anyone to live their dreams. 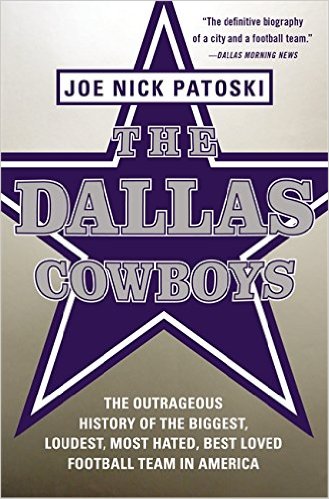 This is a nicely comprehensive history of the Dallas Cowboys.  The only caveat I have is much of the history is already known.  But I enjoyed the book nonetheless.

The first section of the book up to the 1960’s is a bit of a bore and was more about the history of Dallas and building up to the creation of the Cowboys in 1960 and the cultural backdrop of “everything is bigger in Texas.”  It does a decent job of that, and was thankfully short.

The next section covering the 1960’s was reasonably well done as well, but since much of that covers the showdown between Clint Murchison, the owner of the Dallas Cowboys of the NFL, and Lamar Hunt, the owner of the upstart AFL Dallas team, the Dallas Texans, is more thoroughly done elsewhere.  Nonetheless this is a critical part of the team’s history and was well written.  The best part of this section was on the field issues and the story behind Don Meredith, a very solid quarterback who just didn’t quite get Dallas over the hump.  But it’s also the story of Bobby Hayes who had his best years in the mid-to-late 1960s but eventually declined due to cocaine abuse.

Had it not been for the dominant Pittsburgh Steelers, the 1970’s Dallas Cowboys might have had more than two Super Bowl wins.  But this was a great decade for Dallas and well chronicled here.  This was the also the decade of Hall of Fame quarterback Roger Staubach and it was refreshing to see a solid, grounded individual not prone to the decadence and excesses we see in players in future years.  The book also does a good job of chronicling the story of Danny White who took over as quarterback when Staubach retired.  He was also a good quarterback but the Cowboys were in decline and he never was able to bring them back to a path of glory.  He simply took over the reins at the wrong time.

The 1980’s saw the Cowboys as a mediocre team at best slogging through the decade toward a rebuilding era in the 1990’s.  This section starts to get into the impending sale of the Cowboys and the ultimate complete turnover we see under Jerry Jones in the 1990’s.

And of course the 1990’s was the decade of the Cowboys, Jerry Jones, Jimmy Johnson, Troy Aikman, Emmitt Smith, and Michael Irvin, with a host of stars on the offensive line and in the defense as well.  This decade is well chronicled as well, especially the furor over the firing of Tom Landry, and then the shenanigans and bad blood that developed between Jones and Johnson, leading to the firing (or mutual parting of the ways) of these two egomaniacs.  This episode in Dallas’s history was soap opera material and has been very well told in the press, but here we get it in one big sour lump.  Dallas won three Super Bowls in four years, but afterwards saw, again, a precipitous decline as Jerry Jones insisted on being the owner and general manager of the team.

The book goes through 2011 with the Cowboys still struggling to be a relevant team again.

Overall I thought the book was well done but so much of the history I already knew, I at times got a little bored with it.  Nonetheless, this is a must read for Cowboys fans, and a book pro football fans will fine enjoyable.

The Dallas Cowboys: The Outrageous History of the Biggest, Loudest, Most Hated, Best Loved Football Team in America

Payton grew up poor in a racially segregated Colombia, Mississippi.  While Payton never experienced firsthand violence growing up, it was a segregated community with all the racial prejudice against blacks that implies.  African Americans were treated as inferior and lived in a specific section of town.  His father was a hard worker and decent man but an alcoholic who didn’t seem to have a great deal of influence in Payton’s life.  But his mother was a hard worker who was the family disciplinarian and real glue that held them together.  This segregated community and overt racism of his childhood is probably what gave Payton a chip on his shoulder for the rest of his life, out to prove that he was inferior to nobody.

As schools were integrated and Payton went on to play high school football, he of course became the darling of the town, as great athletes often are, and was one of the most sought after football prospects.  He ended up, through some shenanigans by the coach, heading to Jackson State in Mississippi near his hometown for his college football career.

There he had a career that landed him as the fourth overall pick in the 1975 National Football League draft by the Chicago Bears, where he had a Hall of Fame career, setting the then NFL record for rushing yards (16,726 yards).  He won a Super Bowl ring when the Chicago Bears won Super XX over the New England Patriots.

This isn’t a biography, however, only about Payton’s nearly unmatched professional football career.  It’s about the man who lived it.  And there we find the darker side of Walter Payton.

Walter lived a happy but sheltered childhood and his sheltered life at Jackson State probably did not prepare him to live in the real world, especially the one outside of football.  There he met his future wife Connie who eventually moved to Chicago with him.

What was Payton’s real personality like?  Fun loving; happy go lucky, and a prankster.  Kind hearted to strangers, children, and those who were in need.  He was quite a compassionate human being.  But he was also childish, jealous, petulant, and someone who always wanted to have things his way.

What do we find out about Walter Payton in this biography?

First, while he was great teammate and superb player he was also a bit petulant when things didn’t go his way.  He wanted the ball and to be the superstar, but also had a quiet way of going about it.  In one of the more telling moments, he hid in a broom closet after the Bears won Super Bowl XX because he didn’t score a touchdown.  What should have been one of the happiest moments in his life turned out to be one of the most bittersweet as he cried in anger and refused to come out to talk to the press after the Super Bowl win, without some cajoling.  Coach Mike Ditka says it is one of his biggest regrets that he didn’t make sure Walter got the ball for a score in the blowout win.

Second, during his playing career Payton abused the painkiller Darvon, often popping them like candy.  He continued to abuse painkillers after his playing career, possibly as self-medication for depression.  Darvon is very hard on the liver and while Pearlman does not draw a direct line to his drug abuse and the live disease that ultimately killed him, he certainly implies it.

Third, Walter Payton struggled badly with loneliness and being out of the spotlight once his playing days were over.  He reportedly contemplated suicide, maybe on more than one occasion, and suffered from depression.

Fourth, Payton was a philanderer and liked women.  He clearly had fell out of love with his wife Connie and didn’t really live with her for most of his post-football life.  In fact, he fathered a child with another woman and had another long-term relationship with a flight attendant.

This lead to another bittersweet moment in Walter Payton’s life.  Against his wishes his girlfriend showed up at his Hall of Fame induction ceremony, unbeknownst to his estranged wife Connie.  In public, Payton, and probably more so Connie, put on the façade of the happy couple.  Payton was angry that his girlfriend showed up and she was literally just a few rows back from his wife and children during his induction speech.

So once again, what should have been one of the happiest moments in Walter Payton’s life instead turned into a nerve wracking, bittersweet experience.

A fifth aspect of Walter Payton that is apparent, even if Pearlman doesn’t say this directly, is he was probably a manic depressive.  If the behaviors exhibited in the biography are accurate, one moment he is manic and happy go lucky, being out public, and trying to make a living on his up and down again business interests.  And at other times he is darkly depressed, not wanting to be out in public, and even contemplating suicide.

Pearlman also points out all of Walter Payton’s good traits.  Even though he trusted very few people, he cared about people and went out of his way to make people around him feel good and he was very charitable to those in need.  He was also a great teammate who led by example on the field and was real locker room leader, even when the Bears had dreadfully inadequate talent around him.  The persona that surrounded Payton as a caring, hardworking, class act was a real part of Walter Payton too.

I think the veracity of this book is hard to question for one very simple reason.  Nearly all of Pearlman’s sources are identified by name.  Only two sources are not – his longtime girlfriend who showed up at his Hall of Fame induction and the woman with whom he has a child (which he never acknowledged).  Otherwise, former agents, players, long-time personal assistant, family members, coaches, and other acquaintances who Pearlman interviewed are all there, speaking through the author.  I have yet to see any of these people come out and refute what they said to Pearlman.  I know that the truth might be painful for many, but Pearlman has done a service to the memory of Walter Payton.