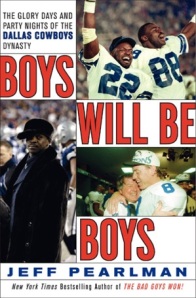 I sat down one Saturday to read Boys Will Be Boys, about the 1990 Dallas Cowboys, and couldn’t put it down.  This book chronicles the hard partying team that won three Super Bowls in four years and is definitively the team of the 1990’s.

Given the drinking, drugs, women, and super hard partying this team engaged in during their run in the 1990’s it is simply amazing that they were able to win championships.  I’m not sure if it is a testament to just what phenomenal athletes these men were, or their dedication to football and winning despite their debauched lifestyle off the field.  According to this book it seems nearly the entire team, with the exception of a few like stars like Troy Aikman, were engaged in a wild years long party off the field, while racking up wins and championships off of it.

Michael Irvin, the Hall of Fame wide receiver and guard Nate Newton appear to be the ringleaders of this band of imbibers.  Of course Irvin has been busted enough times with drugs and women that it comes as no surprise.  What is surprising is just how pervasive the lifestyle was.  Certainly we all know there are a handful of players on every team that lead pretty wild lifestyles, but how a team that seemed to be immersed so deeply in drinking and womanizing (and presumably other illicit activities as well) could be so successful is really amazing.

Another completely bizarre character is defensive end Charles Haley.  Basically run out of San Francisco by his teammates for his horrible behavior, he nearly fit right in with the Dallas Cowboys.  This nasty fellow was known for exposing himself to his teammates and constantly harassing them and stirring up trouble.  Only professional athletes could ever get by with the horrendous behavior and bizarre antics of Haley.

There is also plenty of other inside information about the 1990 Cowboys.  We learn more about Troy Aikman and his leadership on the field.  And of course there is great detail about coach Jimmy Johnson who turned a blind eye to off field behaviors as long as the team kept winning.  We follow how he turned a losing team into a powerhouse with adroit drafting, his arrogant yet winning ways, and his falling out with owner Jerry Jones, when two Texas sized egos found they could not coexist.  We also get a view of the inevitable decline after the inept blowhard Barry Switzer took over as head coach.

All in all this was a wildly informative book about a wild but winning team.

Boys Will be Boys