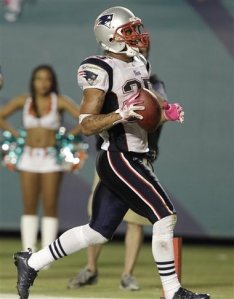 The big theme of the last two weeks was the huge days wide receivers have put up, with Terrell Owens of the Cincinnati Bengals snagging ten catches for 122 yards and a touchdown this week.

And Josh Scobee’s 59 yard field goal allowing the Jacksonville Jaguars to put up a big win against the Indianapolis Cots got upstaged on special teams Monday night by Patrick Chung’s heroics.

And of this writing, of course, the New England Patriots trade of Randy Moss to the Minnesota Vikings is the story of the week. But I will save that for later.

First, fellow Patriots fans should not get overly excited about our defense after this win. They are still awful. Miami pretty much moved the ball on us at will most of the game and in the second half gave up a long touchdown run to Ricky Williams. Rob Ninkovich’s two interceptions stopped drives, yes, but until Miami got way behind in the second half, our defense still looked vulnerable.

Our offense was efficient but didn’t have the greatest first half, especially in the red zone. But when Miami scored in the second half to inch closer, Brady engineered an excellent drive for a touchdown that pretty much sealed the game.

For Miami much of the blame was placed on the Chad Henne. He has seen his better days at a quarterback, and played poorly once his team got behind, but I think he’ll bounce back. I liked his attitude after the game in the press conference, taking some blame and saying he’ll get better. The special teams coach was also fired. And there were a lot of bright spots for Miami. The Patriots took away Brandon Marshall, but Davone Best had a great day. And Patriots left tackle Matt Light had a horrible time against Miami Linebacker/Defensive End Cameron Wake. That kid had an unstoppable motor until late in the game.

To me, Miami seems to be a slightly above mediocre team with a lot of upside. Unfortunately, I would say the Patriots defensive this year has been a slightly below mediocre team, but they do have a huge upside in their youth, speed, and raw talent.

But this was the Patrick Chung show with the blocked punt, blocked field goal, and pick six late in the game. Oh, and let’s not forget Woody, or Woodhead, and no this not a plug for an erectile dysfunction drug. Thank you Jets.

So let’s not spoil this with talking about the Randy Moss trade which I will leave for another time.

This was a brutal, hard hitting, defensive game and the Ravens managed to come out top, mainly because their defense played extremely well. The Steelers squandered two scoring opportunities off of Ravens’ turnovers and Jeff Reed missed two field goals, which were really the difference in the game. While the Ravens still gave up some yards in the running and passing game, they mostly played great when it counted. Two road wins against division opponents, even if one of them was an improving Cleveland Browns team, puts the Ravens where the want to be four games into the season.

And Pittsburgh must be thrilled to have survived four games with a 3-1 record while Ben Rottenberger served his three game suspension for egregiously bad and probably criminal behavior toward a female college student in the off season. It’s rather interesting that both defenses gave up scoring drives late in the fourth quarter, with Baltimore having the ball last and the last laugh as they waltz out of Heinz Field with a victory in hand. But I think the Steelers are still the team to beat in that division. While you can only greatly admire the excellent play of Charlie Batch, this offense should be more explosive with Big Ben at the helm.

It’s hard to choose an MVP for this game because it was a real team effort across the board. But cornerback Lardarius Webb broke up to sure touchdowns to Mike Wallace so that’s my guy.

The AFC Central should come down to the wire and expect both of these two teams to be in the playoffs. And I have to say, the Steelers are scary good with Big Ben coming back and Rashard Mendenhall finally looking like the running back he was drafted to be.

After seeing about one full game of Kevin Kolb this season I have one word to say – awful. What Andy Reid sees in Kolb I have no idea. He was awful in the first half of the first game of the season before sustaining a concussion and he was awful against the Redskins when he came on in relief of Michael Vick. It’s pretty clear why Andy Reid made the smart move and started Vick. I’ve heard pundits make all kinds of excuses for Kolb’s performance but he clearly does not see the field well and misses wide open receivers he should hit under the type of pressure any quarterback is going to face. And it is also clear the coaches don’t trust him because as soon as he enters the game the offense becomes screens and short dump off passes with a few runs mixed in. The only time they finally opened the offense up a little bit is when they got behind. And for the most part Kolb could not deliver. Going into this season I was a big believer in Kevin Kolb. Not anymore.

I will say this for him though. He does have a good arm and he put the ball right in Jason Avant’s hand on the hail marry at the end of the game. Avant should have caught the ball for a stunning win.

And while we are on the Eagles, linebacker Quintin Mikell should be benched. He was lousy throughout the game and was the worst defensive player I saw this week. And I only had to laugh when I saw Asante Samuel and his half-hearted, make believe attempts to make a tackle. And then getting hurt on one. I remember when he was with the Patriots a few times I even saw him run away from big running backs with a head of steam.

The Redskins played relatively well but the Eagles soft defense made them look a little better than they probably are. They ran the ball well, and once Donovan McNabb settled down a bit in what had to be an emotional day for him, he played well enough to win. But his inaccuracy, which has plagued him throughout his career, was certainly on display for large parts of the day. The running game helped the Redskins offense out a lot. And I do wonder when Ryan Torain will simply be named the starter over Clinton Portis. Portis ran well but he stays hurt, which is unfortunate but not uncommon for an older running back with the kind of mileage he has being a featured back for so many years.

And linebacker Lorenzo Alexander was a beast on special teams! He was jacking people up left and right.

At the end of the day, despite not having off the chart stats, I felt Ryan Torian’s running sealed the deal.

I can not remember a worse performance by an offensive line in my lifetime as the Chicago Bears displayed on Sunday night. That was such a pathetic, embarrassing, and atrocious performance I’d be utterly ashamed were I on that unit. And again I heard pundits making excuses that it’s Mike Martz’s system, blah blah blah. I don’t care what system you are in, or what your offensive scheme is, if you have an offensive line that blocks that badly you are going to lose, badly.

I don’t like Jay Cutler and his petulant attitude but I really felt sorry for him against the Giants. He had no prayer in the backfield. The Giants defensive line was left to basically tee off on him until he was knocked out of the game. And then they knocked Todd Collins out of the game. Had I been third string quarterback Caleb Hanie, after seeing the massacre on the field, I might have turned in my helmet and shoulder pads and quit the NFL for good before trotting on the field and putting my life on the line against a basically unblocked Justin Tuck and Osi Umenyiora.

PLAYERS OF THE WEEK